The unrolled fly line as it is in the moment we start the next cast should be as straight as possible and it's direction should match the main trajectory (launch direction) for the next cast as good as possible.

Anything else usually makes it harder to keep control of the next cast. Having said this, there are of course situations in which we violate the 180 concept on purpose, like when needing a steeple cast (high back cast) behind to get over some bushes, while in the next forward cast we need a horizontal shoot in order to reach the fish further out.

In such a situation we would violate the 180 concept (therefore it's a concept, not a principle always no matter what being 100% correct) on purpose. A lot of fly casting instructors often did claim, that violating the 180 concept would cause a tailing loop.

My good friend Aitor Coteron and I have denied that for quite a long time. Aitor did provide several video evidence in addition.

Interestingly those instructors who kept (and still keep) disbelieving the evidence which has been provided for some years now never managed to publish a disproof of our statement or hardly any proper video themthelves.

Is it easy to aim for a high back cast and then change direction for the next forward cast?

Of course not! In fact many students will fail to control smooth acceleration for the forward cast here and tail. BUT that tail will be caused by a too uneven force application in the forward cast. Yes, as simple as that!

Here is a perfect video of Aitor:

Paul brought up some confusion about how to differ between a tailing loop and a dangling end. We discuss this here:

For me this is very clear: 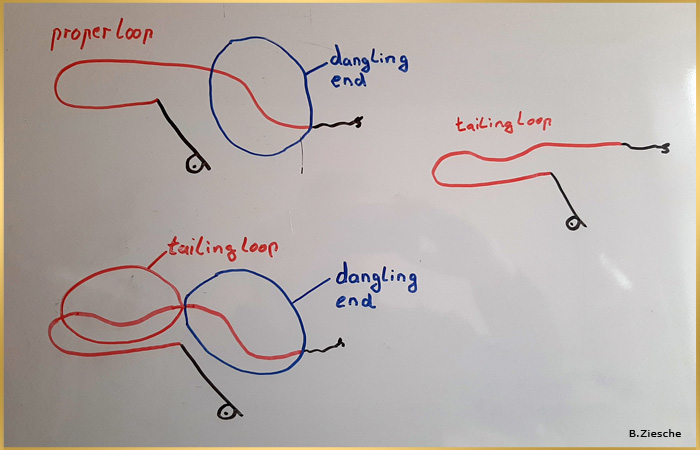 The dangling end can follow a brilliant (smooth) accel. tip path, while a poor accel. tip path puts in the taling loop. Of course I can very easily explain and outline one from the other.

The dangling end is a proof, that the line end does not follow tip path, while the tailing loop proves tip path to directly influence some part of line always.

Besides all that I was chasing some serious carp all week long as you may see in the pictures below.

Great week to all of you!